END_OF_DOCUMENT_TOKEN_TO_BE_REPLACED

The State of the Union political panel reviews their expectations for Obama's state of the union address. 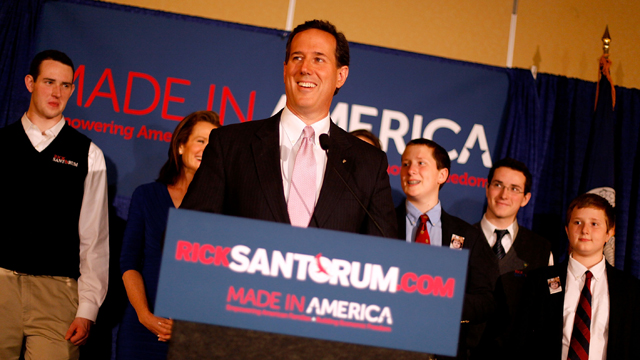 Santorum takes the Deep South: Rick Santorum won the Republican presidential primaries in Alabama and Mississippi last night. He's solidified his position as the favorite candidate for the GOP's conservative base. Santorum may have the momentum, but Romney has the delegate count in his favor. Last week, the Gingrich campaign said they had to win Alabama and Mississippi to remain credible. But there are no signs of Gingrich bowing out. Last night he asserted he would continue to the national convention in Tampa.
END_OF_DOCUMENT_TOKEN_TO_BE_REPLACED

Dick Armey on Newt Gingrich: "I feel bad for him. I think he's digressed into a state of taking a second rate campaign and turning it into a first rate vendetta, and I think he's putting himself out of the game because he can't get over his obsession about his own hurt feelings over the campaign in Iowa."

Tony Perkins on Romney: "I disagree that Romney has captured the evangelical support, the conservative support. They're warming to him but he still has a long way to go. "