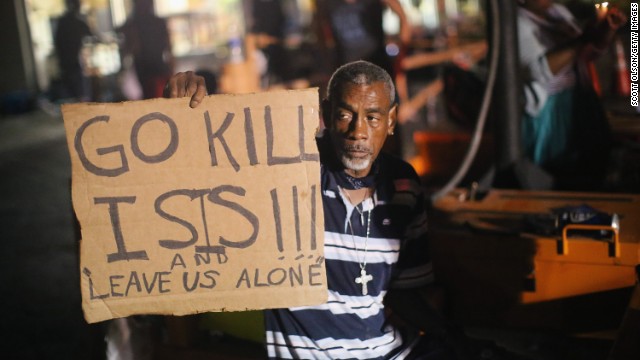 2. Racial divisions on Ferguson. African-Americans and whites have sharply divided reactions to the Michael Brown shooting and its aftermath. A new Pew Research Center poll finds 80% of African-Americans surveyed said the shooting in Ferguson raises important issues about race that merit discussion, while whites by a margin of 47%-37% said the issue of race is getting more attention than it deserves. The poll also found that 65% of blacks said the police had gone too far in in responding to protests. Only 33% of whites said the police had gone too far, while 32% said the police response has been about right and 35% offered no response.

3. U.S. response to ISIS. The U.S. launched a failed commando operation earlier this summer in an attempt to rescue murdered photojournalist James Foley and other Americans being held by ISIS. A U.S. official said the secret operation was unsuccessful because the hostages were not present at the site of the raid. This week ISIS released a video of one of its fighters beheading Foley in retaliation for U.S. airstrikes in Iraq, and threatening to kill another American journalist if the strikes did not end. Meanwhile a spokesman for GlobalPost, the news organization for which Foley worked, said ISIS demanded $132 million for Foley's release. National Security Council spokeswoman Caitlin Hayden told CNN that U.S. policy is not to grant concessions to hostage-takers. “Doing so would only put more Americans at risk of being taken captive," she said.

4. Gov. Rick Perry. The Texas governor and potential 2016 Republican candidate is keeping up a very public schedule even as he deals with legal issues back in his home state. Perry was booked on two felony counts earlier this week. A grand jury indicted him for alleged abuse of power and coercing a public servant in connection with using his veto to defund a Travis County public integrity office. In an appearance at the Heritage Foundation in Washington, Perry said was "very confident" in his case and called his indictment an attack on Texas' system of government. Perry also said it was "a very real possibility" that members of ISIS are crossing into the United States from the southern border, where tens of thousands of migrant children have been streaming in from Central America in recent months. Perry said because the border is insecure, it is possible that individuals from ISIS or other terrorist states are taking advantage of the situation, although he said he did not have any proof that is happening.