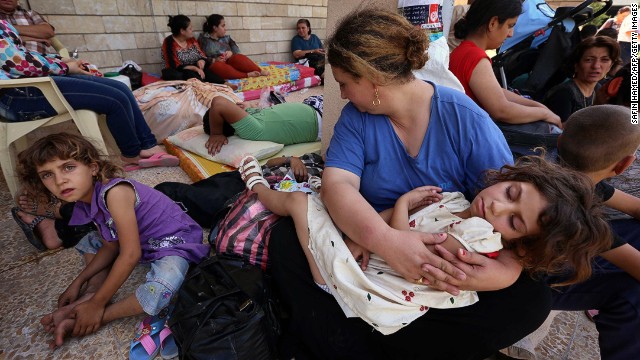 2. Ukraine crisis. Ukraine's government says militants shot down a Ukrainian military plane in the rebel-controlled territory of Donetsk. Early reports indicate the aircraft was downed by a Russian-made surface-to-air missile. It is believed to be the same weapon that brought down Malaysia Airlines Flight 17. This latest confrontation comes one day after Russian President Vladimir Putin imposed a ban on food imports from countries that imposed tough new sanctions on Russia

3. Israel-Gaza conflict. Time is winding down on a 72-hour truce between Israel and Hamas. The cease-fire is set to expire Friday morning. Israel says it is willing to extend the truce unconditionally. Hamas says it is prepare to resume fighting if it doesn't win key concessions in peace talks currently underway in Egypt. Hamas wants Israel to end its blockade in Gaza, while Israel is calling for the disarmament of Hamas.

4. Montana Senate race. Democratic Sen. John Walsh is dropping out of the contest amid allegations of plagiarism. The move further hurts Democrats’ chances of maintaining control of the Senate.  Republicans need a net gain of six seats to win a majority. Walsh was appointed to the Senate after the state’s veteran Democratic Senator Max Baucus left to become the U.S. Ambassador to China.  Walsh, who is accused of not properly attributing certain material in a paper to complete his master’s degree at the Army War College, has been trailing his Republican opponent Steve Daines in recent polls.