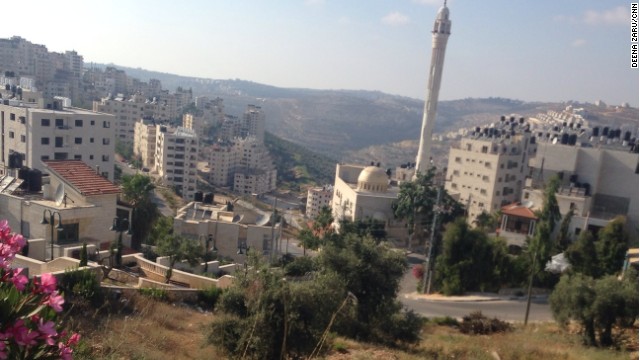 Home through the eyes of a Palestinian

Even before the deaths of the three Israeli settlers were confirmed, an Israeli military operation had begun in the West Bank. It was then, with a bookbag on my back and a rip in my jeans, that I crossed the Jordan River on a bus and arrived in Jericho after almost thirty six hours of travel.

It had been three years since I’d gone home and I couldn’t wait to see my grandparents, cousins and friends.

The weather was hot and dry, as expected, and my hair stuck to the back of my neck. I edged my way out of a narrow door guarded by an Israeli soldier in jeans and a rifle and walked into a sea of people, wondering how long it would take to get on the next bus. Voices of cab drivers, travelers, crying children and buses surrounded me and from them resonated a faint echo—one that comes when your ears have popped, as you sink further below sea level and enter “Areeha,” Arabic for Jericho.

I had just crossed Al-Karamah Bridge, known as Allenby Bridge to Israelis and King Hussein Bridge to Jordanians, connecting Jordan with the West Bank. Built during the Ottoman Empire, Al-Karamah is now the only way in and out of the country for Palestinians living in the West Bank, who are forbidden by Israel to fly into the Ben-Gurion airport in Tel Aviv.

After three taxi rides, seven security checkpoints, four buses and six hours, I had one more bus and one more cab to go before I was finally home.

Crossing the bridge is an elaborate and unpredictable process that has taken me five, ten, and even twelve hours. You can be asked to come back the next day. The bridge could be closed early or completely; you could be banned, blacklisted or turned away.

People have been interrogated and imprisoned on the bridge; some exiled, and on Al-Karamah Bridge, people have died.

Along with a fragile sense of relief, crossing the bridge left me a little sick to my stomach, with a lump in my throat and a familiar longing for home.

“Which one is your bag?” asked a Palestinian boy with tan skin and green eyes, who looked about fifteen, as he pushed through a crowd of travelers and dove in to sort through the suitcases that were just thrown off the bus. Some zippers were half open after being searched multiple times. I wondered if this time any of my possessions would be missing.

We talked as he helped me with my bag. Mohammad was from Jericho and had been working at the bridge for three years. I stood in line to buy yet another pair of tickets- one for me and one for my bag as he volunteered to run and buy me a bottle of water. He wheeled my suitcase and lugged it onto the fifth and last bus of my journey and told me “It’s a good thing you came now before the bridge closes. It was easy today.”

“The bridge is about to close?” I asked.

“You know the situation is about to burn up again,” he told me matter-of-factly. I handed him five Jordanian dinars and boarded the bus.

Upon registering my arrival with the Palestinian Authority and completing the last step of the crossing, I jumped into a cab. Forty minutes later I finally arrived in Ramallah sometime after three in the afternoon to a familiar and bitter sense of unrest and turmoil characterized by days of mourning and nights filled with raids by the Israeli forces.

Over the next week there were hundreds of arrests, break-ins at universities and homes and several killings across the West Bank.

Some days the Palestinian Authority ordered everything closed in mourning and on other days, bakeries and pharmacies were allowed to remain open. Some Palestinians believe mourning is a necessary expression of respect for those who were killed, while others believe that when living under occupation, life and business must go on as much as possible.

While the city mostly shut down, the thick steel doors of some stores were kept open with the slightest gaps but the lights were off and the shutters were closed. I waved through the gap and bought bread for my grandmother and met my friend at a coffee shop that wasn’t serving anything.

Khaled, a refugee boy in his early teens, who has been selling gum on the streets for years, conducted business discreetly but as usual, hiding the boxes of gum behind a tree, only holding a couple of packs at a time. He sells each pack for two shekels (about fifty cents) from sunup until sundown.

Some people have learned to sleep through the shootings and the raids but many children, like my eight-year old cousin Zeina, are too troubled to sleep. People monitor the movement of the soldiers on Facebook for photos, news and locations of the raids. But when the shooting reaches your neighborhood, there’s no chance of sleep.

I left Ramallah again on a day when the mourning had broken and signs of day-to-day life had resumed among the burnt tires and shattered glass from the raids. Shops were open, people filled the streets and Khaled was there, now, with his box of gum in hand.

As we drove through the streets of Jericho to get to the bridge, a deep sense of sadness settled inside me as I feared what was to come in the next few weeks.

When you live under occupation, home often becomes a place that you don’t recognize and a place you have no control over.

When I got back to DC, friends and co-workers wanted to hear about my trip. But, as the situation deteriorated at home and the strikes on Gaza filled my news feed, the most persistent question people asked was “Don’t people just want peace?”

As I struggled to explain I was reminded of something Martin Luther King Jr. once said: “… there can be no peace without justice.”