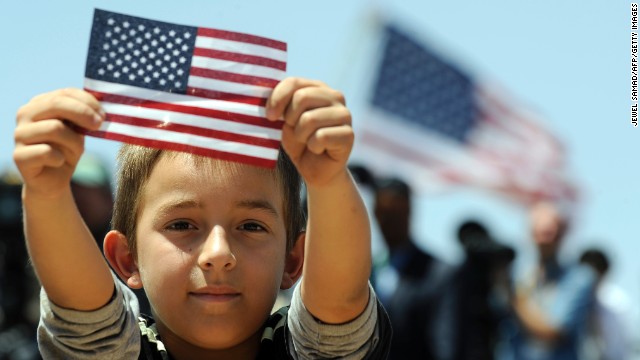 Your daily scoop of what State of the Union is watching today, July 2, 2014.

1. Immigration crisis.  The federal government's effort to deal with the recent surge of undocumented immigrants from Central America is meeting with resistance.  A group of angry protesters blocked three buses of immigrants who were transported from south Texas to southern California.  Demonstrators in the city of Murrieta forced the buses to turn around while yelling "USA" and "deport."  They also got into a heated shouting match with counterdemonstrators.  The 140 immigrants were eventually taken to San Ysidro and San Diego for processing.  Unaccompanied children account for the vast majority of the immigrant surge, which has been fueled by violence in Guatemala, El Salvador and Honduras.  Immigration advocates and the White House have described the influx as a "humanitarian crisis."

2.  Israeli-Palestinian tensions rise.  Violence erupted between Israelis and Palestinians after a Palestinian teen's body was discovered in Jerusalem. According to Palestinian media the 17-year-old was abducted by settlers. Israeli police say they are investigating whether his death was in retaliation for the killing of three Israeli Jewish teens whose bodies were discovered earlier this week.  In a statement, Israeli Prime Minister Benjamin Netanyahu condemned the Palestinian teen's killing and called for a speedy investigation to find "who is behind this despicable murder and the background to this act."

3.  Obama: The worst modern-era president?  A majority of Americans think so according to a new poll.  The Quinnipiac University survey found that 33% of people questioned believe Barack Obama is the worst president since World War Two.  Twenty-eight percent ranked George W. Bush as the second worst, while 13% chose Richard Nixon as the third worst president. The poll also found that most Americans think Obama is incompetent at running the government by a 54% to 44%.  Ironically, the man Obama defeated handily in his 2012 re-election bid comes out looking rather well in the survey.  Forty-five percent of those questioned say America would be better off if Mitt Romney had won, while 38% say the country would be worse off.  Keep in mind, most presidents' approval rating tend to increase after they leave office.