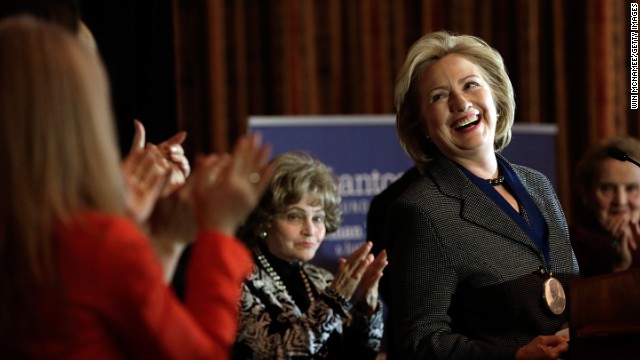 While certainly more reminiscent of a political campaign than a book tour, Hillary Clinton's trip around the country has succeeded in not only selling more than 100,000 copies of her book "Hard Choices," which will debut at number one on the New York Times best seller list next Sunday, but also in highlighting the gender discrepancies in American politics today.

Gender inequality is nothing new to Washington. Since 1789, only 44 women have served in the United States Senate, 20 of whom are currently serving. Sixteen of these Senators are Democrats, while four are Republicans. Today, the House of Representatives is less than 20% female. Out of the 79 women who hold seats in the House, 60 are Democrat and 19 are Republican.

How did some women break into politics back in the 1920s and 1930s? The first female senators were appointed to seats left vacant by deaths – usually of their husbands. Some of these women even gave up their seats when male successors were appointed.

While the American political system has certainly come a long way, even today some of the most powerful women in politics are constantly singled out based on their gender, while men in corresponding positions of power are accepted as leaders much more easily.

Clinton has been no exception. Since her days as first lady, she has been followed by questions about her clothes and hairstyles. Through her numerous televised interviews and appearances around the country, she fielded questions ranging from addressing her ability to deal with sexism, to her future role as a grandmother – questions that perhaps would never have been asked of a male potential presidential candidate.

So is America ready for a female president?

Earlier in June, Clinton was optimistic, when she said that she felt the political environment had become friendlier, and more open to women. "It feels different," she said, and continued to express her opinion that America has gone through a "learning process," and that women need to become more active and confident in the political realm, and push themselves to run for office. Whether she will take her own advice and run for office, however, remains to be seen.