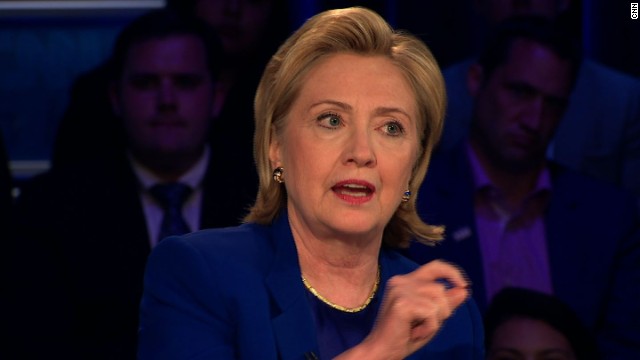 I felt myself being watched.  Amidst the flurry of instructions from a producer, I peeked over my shoulder to see a mother and her two daughters openly staring at the cluster of people sporting CNN badges.  They were tourists in the Newseum, sporting comfortable shoes and wide eyes.  As a new intern at the CNN’s Washington DC Bureau, I know that look of awe well.  I know it’s on my face every day.

This week, CNN hosted a town hall broadcast with Hillary Clinton – part of the former Secretary of State’s book tour.   As an intern for CNN’s “State of the Union,” I was recruited to help with the grunt work.  Although I didn’t even make it inside the studio for the broadcast- not disappointed in the slightest, of course- I learned more from the outside, about what happens on the inside, than I thought.  When we learned the studio was full, the intern contingent quickly walked to the nearest restaurant, begged the manager to change the channel away from the World Cup, and promptly glued ourselves to the subtitles.  Undoubtedly, we looked a little crazy.  We just wanted to see our colleagues’ work behind the scenes pay off.

Bustling around in dress clothes and badges with Secret Service agents is what drew that family, and many more, to stare.  We looked important. Were we?  Yes and no.  Our duties for the day included ushering, and my personal favorite, putting wrist bands on the guests.  We were glorified bouncers, instructed to triple-check every last name and ID.  Getting in a room with Hillary is no small feat, and even the guests who weren’t asking questions were carefully screened.  It was our job to catch minor problems.  The Secret Service was on hand for any other, more pressing, security threats.

Our duties were not glamorous or complicated.  The gawking tourists had no idea how low we were on the totem pole.  The important people were inside, behind closed doors.  What we did for the production, however, was monumental.  It’s all the minute tasks that make what you see on TV possible.

When the camera rolls and the production goes live, viewers don’t see interns scurrying around, production assistants carefully holding cables or studio managers signaling the audience to clap.  They see a finished product – Hillary Clinton and Christiane Amanpour, sitting at a table, surrounded with a full audience and perfect lighting.   How does the lighting strike the balance between washed out and over-exposed?  Interns sat in those positions for hours while crews tweaked the dozens and dozens of lights.  They tested camera angles for Wolf Blitzer’s special edition of “The Situation Room” with stand-ins for Wolf and other CNN correspondents and contributors.   How is the audience packed with diverse, friendly faces?  We checked them in and made sure they were in the studio with plenty of time to spare.

So much more goes on behind the scenes of a broadcast than you could ever imagine.  Whether it’s Hillary Clinton at the Newseum, breaking news on a nightly program or a heated argument during a Sunday show, little duties help create the bigger picture.  It’s a team effort, and as interns, we’re lucky to be part of that team.