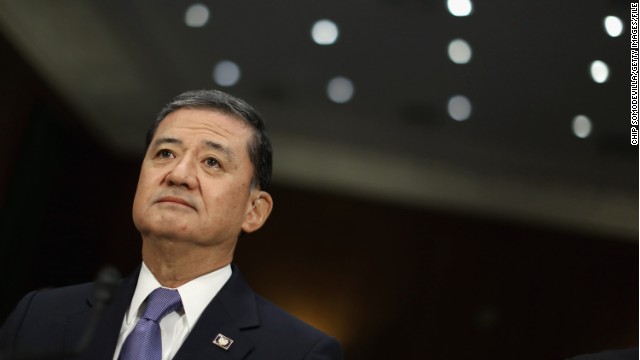 2. Shinseki's apology. Before his meeting with President Obama, Eric Shinseki addressed a group of military veterans.  He told the National Coalition for Homeless Veterans that he had begun the removal of top officials at the Phoenix VA hospital, and that the 1,700 veterans who had been waiting for appointments there are being contacted and brought in for treatment.  Shinseki also apologized for the VA mess. "I accepted as accurate reports that I now know to have been misleading with regard to patient wait times, "Shinseki said. "I can't explain the lack of integrity among some of the leaders of our health care facilities. This is something I rarely encounter during 38 years in uniform and so I will not defend it because it's indefensible but I can take responsibility for it and I do."

3. The new VA chief. Deputy Veterans Affairs Secretary Sloan D. Gibson steps in as the interim VA head.  Before coming to the department in February, He served as President and CEO of the USO.  He also has experience in the banking industry.  Gibson is a graduate of West Point and is the son and grandson of military veterans.

4. Hillary Clinton and Benghazi. The former Secretary of State strikes a defiant tone regarding Benghazi in her soon-to-be-released book "Hard Choices." Politico, which obtained a chapter of the book, reports that Clinton says there is a "regrettable amount of misinformation, speculation, and flat-out deceit by some in politics and the media."  Clinton also suggests that she will not participate in any congressional investigation of the 2012 terrorist attack in which four Americans were killed.  "I will not be a part of a political slugfest on the backs of dead Americans," Clinton writes.  It's just plain wrong and unworthy of our great country.  Those who insist on politicizing the tragedy will have to do so without me."

5. Goodbye to Jay Carney.  President Obama announced a second resignation Friday - that of his press secretary Jay Carney.  The President broke the news in the White House press briefing room with Carney standing by his side. Carney was Vice President Biden's spokesman prior to working for the President.  Before joining the Obama administration, Carney was on the other side of the White House briefing room podium as a Time Magazine correspondent.  Carney's deputy Josh Earnest will become the new White House press secretary.