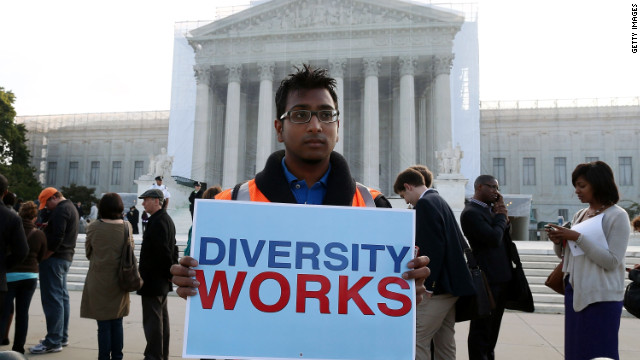 A consideration of race

The Supreme Court’s decision upholding Michigan’s ban on affirmative action renewed debate about the right of states to act on the issue and whether a public university's consideration of race in admissions is constitutional.

Whether one considers affirmative action just and necessary or a form of discrimination, there are undeniable educational disparities in the United States based on race and socioeconomic status.

“With or without affirmative action, the question for universities is what have you done in your admissions process to ensure diversity?” says LZ Granderson, a lecturer at Northwestern University and CNN commentator. “The socioeconomic status of a disproportionate number of minorities prevents students from accessing higher education.”

The U.S. Education Department’s Office for Civil Rights conducted a survey of the 97,000 public schools and 16,500 school districts in the United States, revealing racial and gender-based achievement gaps. The survey found that males of color are even more impacted than females of color.

In light of systematic inequalities, some argue that not only does affirmative action not address the root of the education gap, but it also sets students of color behind.

In his book “Mismatch: How Affirmative Action Hurts Students It’s Intended to Help and Why Universities Won’t Admit It,” UCLA law professor Richard Sander writes that placing students in educational environments they are not prepared for could discourage them and in some cases, cause them to drop out due to learning, competition and social mismatches.

“I’m not categorically opposed to racial preferences. In moderation they can be a helpful supplement to socioeconomic preferences,” Sander says. “But schools are not making a lot of preferences aimed at socioeconomic disadvantage and they’re not doing enough to support the students they admit. It’s like guaranteeing failure.”

Sociologist Roxanna Harlow says that students of color are often overlooked due to discriminatory admissions processes or poorly funded schools and “the immediate assumption that affirmative action causes schools to admit students who aren’t qualified” is a common misconception.

“Property taxes drive the force of public school funding, which segregates neighborhoods by income and race. Because of that, racial and ethnic monitories have higher concentrations of their populations living in poverty and attending under-served schools,” says Harlow.

In schools with less resources and less qualified teachers, students might have lower test scores, little or no access to Advanced Placement courses, and less access to extra-curricular activities. Also, those who need to work due to a lack of finances can be prevented from getting internships and other educational experiences.

Attorney George Washington, who represents “By Any Means Necessary” in Schuette vs. BAMN tells State of the Union that the Supreme Court’s ruling in the Michigan case is “outright discrimination and an outright endorsement of separate and unequal political rights. It’s a historic disaster.”

Jennifer Gratz has led the fight against affirmative action since she sued the University of Michigan in 1997 for being rejected from the Ann Arbor campus, arguing that she was rejected because she is white.

“The Supreme Court ruling was a great victory for equality both on a personal level for me and for the voters in Michigan and the seven other states that have passed similar efforts,” Gratz tells State of the Union. “There are disparities based on socioeconomic status but these disparities transcend race.”

Gratz supports a university’s consideration of a student’s socioeconomic status in the admissions process but believes that racial consideration is discriminatory.

“The truth is, universities make all kinds of exceptions. If daddy gave a lot of money, you’re in. The ruling is saying that universities can make any exceptions based on any qualifications they want unless it’s a program that benefits black and Latino students,” says Washington.