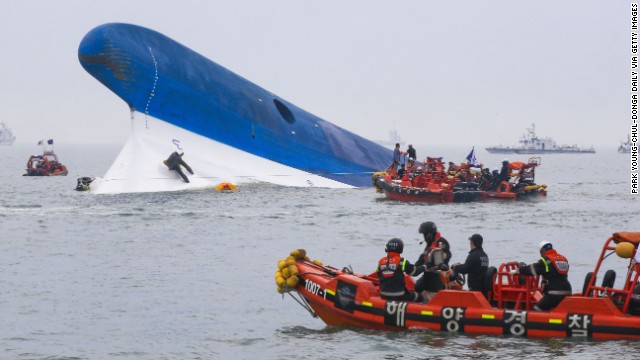 Your daily scoop of what State of the Union is watching today, April 16, 2014.

1. Korean ferry disaster. It’s a massive operation to try and rescue hundreds of passengers from the Korean ferry Sewol that sank off the south west coast on its way to a resort island. Many passengers, including some of the 300 high school students from Seoul on a field trip, jumped from the ship before it sank. Survivors report being given conflicting guidance on whether to stay in place. Helicopters, fishing boats, as well as police and military ships recovered passengers after the ferry rolled and sank relatively quickly miles away from its destination, Jeju. U.S. Navy ship USS Bonhomme Richard, already in the area, went to scene to offer assistance to the South Korean rescue efforts.

2. Flight 370 families have questions. Some of the families of Malaysia Airlines Flight 370, missing for more than a month, are asking authorities pointed questions via a list posted on Chinese social media that is directed at both the Malaysian government and the airline. Many of their queries involve technical issues regarding equipment from the “black boxes” to the emergency locator transmitters. But anguished family members also want to know exactly what the airline did immediately after the flight went missing. They want to be assured that whatever evidence is ultimately gleaned from the search is shared with the families. Both Malaysia Airlines and the Malaysian government repeatedly state they’re doing everything possible to find the missing plane and are sharing as much knowledge as they have with the families.

3. Sneak peek at the new SAT. Applying to college is fraught with stress and competitiveness, and any change in the process can increase anxiety multiple levels for both students and parents. The College Board’s website is now offering the first glimpse of a few sample questions of the new version of the SAT that will be used starting in 2016. The new SAT will no longer have an essay requirement, and questions will now be geared towards practical problems like currency conversion and using words in context.

4. Jay Z goes bicoastal. Fans and the press thought today’s announcement in Los Angeles by rapper Jay Z about his “Made in America” festival for 2014 would include news that his wife Beyonce would share the stage with her husband this summer. There wasn’t any formal announcement of the duo appearing together, but Jay Z did announce that he’s bringing his hugely popular multi-act festival simultaneously to Los Angeles and Philadelphia over Labor Day weekend. Freeway alert: organizers and Los Angeles officials say they expect around 50 thousand fans to descend on downtown LA.