In December 2013 U.S. district Judge Robert Shelby struck down a 2004 ban on same-sex marriage in Utah. The decision led to a strong reaction among supporters of "traditional" marriage and religious groups.

“Here is just another example of the federal government intruding on the definition of marriage, which is traditionally a state jurisdiction,” said Republican state Senator Wayne Niederhauser, president of the Utah State Senate.

“The general belief here in Utah is that children should be raised by a father and a mother. That’s it. That’s what people believe is the right atmosphere for a child to be raised in,” Niederhauser told CNN’s State of the Union.

Utah Governor Gary Herbert (R) was “disappointed” by the ruling, which he considers to be a threat to traditional marriage, and has appealed the ruling through the state’s attorney general’s office.

Meanwhile, the Supreme Court put a temporary hold on same-sex marriages in Utah while the appeals process takes place.

Michael Ferguson and Seth Anderson were the first same-sex couple to receive a marriage license in Utah but since the Supreme Court’s decision, their marriage and the marriages of nearly 1,300 couples are currently not recognized by the state.

The couple told CNN that Utah has consistently demonstrated “animus” towards the LGBT community. They do not trust the state to protect their rights and believe their right to marry should be protected by the federal government.

For same-sex couples with children the situation became more complicated this week when Utah Attorney General Sean Reyes (R) filed a petition with the Utah Supreme Court to stop all adoptions by LGBT parents already in motion.

Charlotte and Leslie have been together for almost 13 years and have two children. They each have full custody of one child and after same-sex marriage was legalized in Utah, they planned to each become the legal guardians of both children. 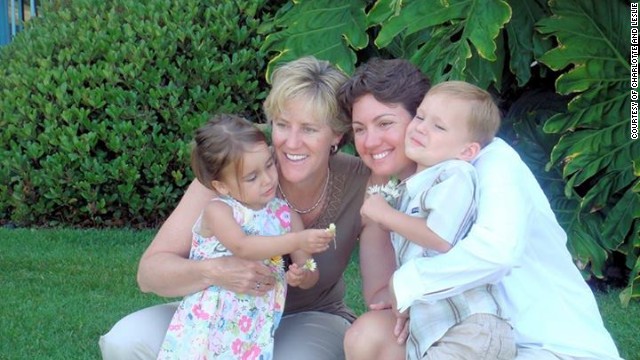 Leslie and Charlotte in Utah with their children.

The couple said that the Utah Attorney General is discriminating against children with same-sex parents and is putting them at risk by limiting them to one legal guardian.

"These are our children and the integrity, safety and well-being of our families is at stake. We will not stop until we have full and equal rights to take care of each other and our children, just like everyone else does." Leslie and Charlotte told CNN.

“In the 1967 case of Loving vs. Virginia, when there were still 17 states that did not allow different ethnic groups to get married, the Supreme Court was very clear that this is a right that is so sacred and should not be left up to the individual states,” said Utah State Senator James Dabakis (D) who married his partner in December 2013 in Utah.

Same-sex marriage is now legal in 17 states and the 10th Circuit Court of Appeals will determine the fate of six more this summer.