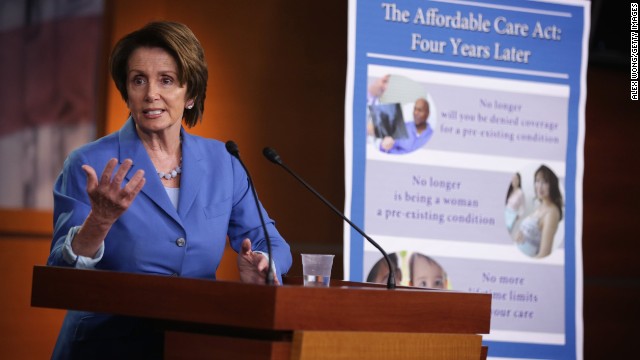 Get your daily scoop of what State of the Union is watching today, April 4, 2014

1. Women in power.  Hillary Clinton thinks the media covers women and men who are in power differently.  "The double standard is alive and well and I think in many respects the media is the principle propagator of its persistence," the former Secretary of State told a women's forum. Congress' top Democrat says while the double-standard is unfortunate, she expected to be treated differently.  "From my own standpoint, I never expected anything but a double standard. I don't know if it's the media or whether people say things that's news that you have to cover," House Democratic Leader Nancy Pelosi said in an exclusive interview with  CNN's Candy Crowley.  See the full interview with Pelosi this Sunday on State of the Union.

Also, see a sneak preview of our interview here: http://cnn.it/1lvNBxV

2.  Flight 370.  Searchers have begun scouring underwater for the missing airliner. There is a race to find the plane's black boxes before their batteries run out as early as this weekend.  Fourteen planes and 11 ships are involved in the search, which involves an area of about 84,000 square miles off the coast of Perth, Australia.  Authorities say their search efforts are basically a shot in the dark. "Really, the best we can do right now is put these assets in the best location - the best guess we have - and kind of let them go," U.S. Navy Cmdr. William Marks told CNN.

3.Fort Hood shooting.  Investigators may be closer to finding out what caused a soldier to go on a gun rampage at Fort Hood, Texas two days ago.  Army Specialist Ivan Lopez killed 3 people and wounded 16 others before ending his own life. "We have very strong evidence that he had a medical history that indicates an unstable psychiatric or psychological condition. (We're) going through all records to ensure that is, in fact, correct. But we believe that to be the fundamental underlying causal factor," said Fort Hood Commander Lt. Gen. Mark Milley.  Rep. Tulsi Gabbard, an Iraq War veteran, and Rep. Tim Murphy, a psychologist, talk about beefing up mental health services for military service members and civilians Sunday on State of the Union.

4. March jobs report. It was slow-but steady on the economic front last month as 192,000 jobs were added and the unemployment rate remained at 6.7%, according to the Labor Department.  All of the employment gains occurred in private sector, which recovered all of the jobs it lost before the 2008-2009 recession. Still the job gains are not keeping up with population growth, which accounts for the slow recovery. Heidi Shierholz, an economist with the Economic Policy Institute, estimates at least 5 million jobs are needed to get back to healthy pre-recession economic conditions