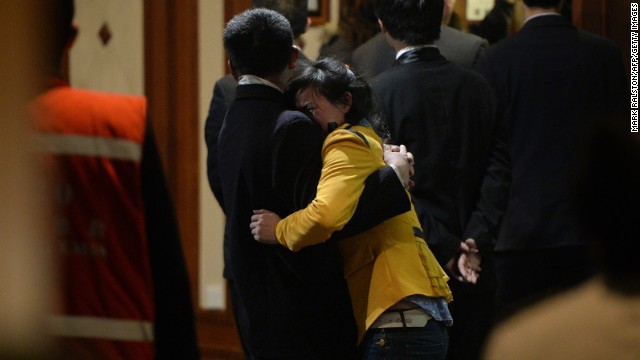 (CNN) Who is to blame when a Malaysian airline’s American-made plane, with British-made engines, crashes into the Southern Indian Ocean with 239 people from 14 different nations?

Just as the plane’s final hours remain shrouded in mystery, the question of who is at fault remains unanswered.  No matter what, the families are guaranteed a sum of $150,000 to $175,000 per victim, under the protections of the Montreal Convention.

Per international law, families can pursue legal action in the country in which the flight tickets were purchased, the country where the airline is based, and the country of final destination.

Is it possible, though, that a “third party” could fully exonerate Malaysia Air?

Other compensation experts suggest the manufacturer: The Boeing Company, headquartered in the United States, could be at fault, if it turns out it was a manufacturing defect. As long as the physical plane is missing, lawsuits would have to advance with no tangible proof.

Indeed, on March 25 Chicago-based Ribbeck Law filed a petition for discovery against Boeing and Malaysia Airlines, seeking to obtain proof of design flaws by inspecting the rest of the Malaysia Airlines fleet.

A lawyer on the case, Monica Kelly, estimates that families could receive between $400,000 and $3 million in damages.  Others suggest it could go as high as $10 million. This disparity can be attributed to where the lawsuit is filed; international law does not dictate where suits against other parties, such as Boeing, may be brought. Some potential litigators and potential plaintiffs would be anxious for the suit to be heard in the US justice system, which awards far more than Chinese courts.

According to Zhang Qihuai,deputy head of the Chinese Aviation Law Association, the largest personal injury award given in China for an aviation disaster case was $250,000.

Despite Monica Kelly’s prediction that her firm, Ribbeck Law, could represent more than half of the victims’ families, most of them are angry and confused, and at this point they’re simply trying to get the “truth” from the Malaysian authorities.