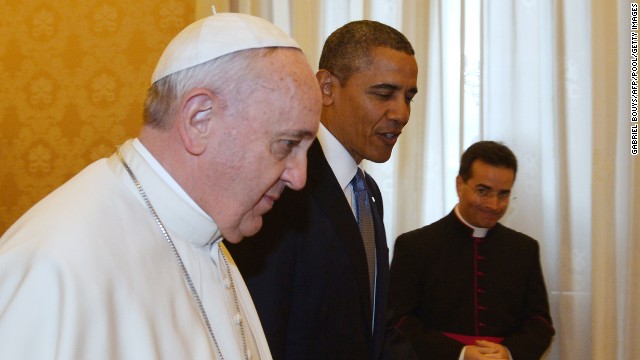 Get your daily scoop of what State of the Union is watching today, March 27, 2014

1. The Pope and the President. President Obama and Pope Francis had their first face-to-face meeting Wednesday at the Vatican. The world leaders posed for pictures and exchanged gifts. "It's a great honor and I'm a great admirer so it's wonderful to be here," the President told the Pope. The meeting was meant to focus on issues where the two men agree, such as addressing income inequality and immigration reform. But the Roman Catholic Church remains at odds with the Obama administration over its support of abortion rights, same-sex marriage and the contraception coverage requirement in the Affordable Care Act.

2. Sen. Rand Paul's twitter joke. The Kentucky Republican used the President's audience with the Pope to take a dig at the NSA's domestic surveillance program. "@BarackObama to @Pontifex: Forgive me father for I have spied. #NSA," Paul tweeted. President Obama said he would seek legislation to change the NSA's collection of U.S. telephone data. "I have decided that the best path forward is that the government should not collect or hold this data in bulk. Instead, the data should remain at the telephone companies for the length of time it currently does today," Obama said in a statement Thursday.

3. And his step toward 2016. A new signal that Rand Paul may be on his way to a White House run. He is the first potential Republican contender to establish a political organization in all 50 states. The nationwide network includes more than 200 people. "It's a mix of folks that will help with finance efforts and with grassroots activist outreach. The people are a blend of traditional Republicans, conservative activists, and libertarians" said Doug Stafford, Paul's chief political adviser.

4. The push to fix Obamacare. Six senators are offering their prescription for improving the Affordable Care Act. The fixes include providing a cheaper, high-deductible insurance plan, allowing the sale of health insurance across state lines, and expanding the option for voluntary coverage for employers with fewer than 100 workers. The senators proposing the changes are Heidi Heitkamp, D-North Dakota, Mary Landrieu, D-Louisiana, Mark Begich, D-Alaska, Mark Warner, D-Virginia, Angus King, I-Maine, and Joe Manchin, D-West Viriginia. Senators Landrieu, Begich and Warner are all up for re-election this year, with Landrieu and Begich facing tough battles. Meanwhile, the administration announced Thursday that more than 6 million people had signed up for Obamacare ahead of the March 31 deadline to enroll for the year.

5. Gov. Christie's bridge scandal. A law firm hired by New Jersey Gov. Chris Christie's office to conduct an internal investigation of last year's lane closures on the George Washington Bridge has concluded Christie was not involved in the incident and found no evidence of wrongdoing by the governor. The scandal has hounded Christie since it was revealed in January that his top aides apparently orchestrated the lane closures for political retribution. Christie has denied any involvement in the scandal.