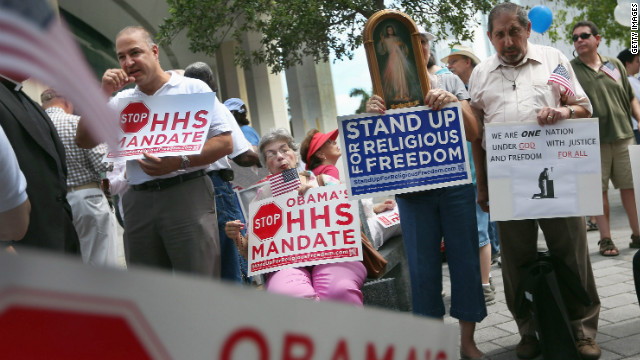 The oral arguments regarding Hobby Lobby vs. Sebelius commence in the Supreme Court on Tuesday. In this case the contraception coverage mandate in the Affordable Care Act (ACA) will be debated, specifically as it applies to for-profit corporations.

The mandate requires businesses of a certain size to provide contraception coverage for their employees. Nearly 50 businesses, many of them Catholic, have sued, and some have protested the coverage of any form of birth control.

However, in the case currently before the Supreme Court, brought on by the Oklahoma-based arts and crafts chain Hobby Lobby Stores Inc., and an identical case brought on by Pennsylvania-based Conestoga Wood Specialties Corp., only certain contraceptives are disputed.

The family-owned businesses have no objection to providing coverage for 16 out of 20 preventive contraceptives required by the ACA, including condoms and diaphragms that prevent conception; however, they are against drugs that they believe could end conception.

The Green family, who owns Hobby Lobby, is evangelical Christian and is specifically against providing insurance coverage for Plan B, commonly known as the “morning after pill” and Ella, often referred to as the “week after pill.”

They believe that human life starts once the egg is fertilized and therefore, drugs that end human life after conception are against their religious beliefs.

“Hobby Lobby's female employees should not have to leave their rights at the workplace door. They are entitled to receive certain preventive care health benefits under the law and were not hired with the understanding or requirement that they act in accordance with their employer's owners personal religious beliefs,” says Elizabeth Wydra, the Chief Counsel for the Constitutional Accountability Center, a progressive think tank and law firm that filed a friend-of-the-court brief in support of the ACA in both the Hobby Lobby and Conestoga Wood cases.

Activists rally outside the Supreme Court March 25, 2014 in Washington, DC. in protest of the Hobby Lobby in the case vs. Sebelius (Getty image).

Likewise, the smaller Conestoga Wood company, which employs about 950 people in making wood cabinets, is owned by a Mennonite family, whose pacifist beliefs are against any action that threatens human life.

“Ultimately, Hobby Lobby isn't interfering with anyone's access–they are simply saying they can't provide a small handful of products the government admits may terminate a human life,” says Mark Rienzi, Senior Counsel for the Becket Fund for Religious Liberty, which represents the Hobby Lobby in the case vs. Sebelius.

At the forefront of this debate is the looming question: Under the Constitution, are corporations people, with the same rights to religious liberty as individuals?

“The free exercise of religion has always been understood to be a personal right, a right of conscience and dignity, in which individuals can be free to express their devotion to their God.  For profit business corporations simply do not share in these rights in the way that living breathing people do,” Wydra told CNN.

However, a debate over religious freedom and whether corporations should be treated as individuals under the law is not all that is at stake.

If the Supreme Court rules in favor of the department of Health and Human Services in this case, the very existence of these businesses could be threatened if they choose to maintain their position against providing full coverage to contraceptives.

Businesses that refuse to comply with providing comprehensive health coverage could face fines of up to $100 a day per employee and for businesses like the Hobby Lobby, the financial burdens could be astronomical.

The Green family estimates that their fines could add up to $1.3 million a day.

In a statement, Hobby Lobby founder and CEO David Green said that abandoning their beliefs is not an option:

“By being required to make a choice between sacrificing our faith or paying millions of dollars in fines, we essentially must choose which poison pill to swallow. We simply cannot abandon our religious beliefs to comply with this mandate.”

On the other hand, if the Supreme Court rules in favor of the Hobby Lobby, the precedent this could set is debated:

Wydra says that this ruling would “allow the owners of a secular, for-profit corporation to impose their views on employees who were not hired with the requirement or understanding that they had to share the religious beliefs of their corporate employer.”

People who support Hobby Lobby's choice to withhold contraceptive healthcare coverage from their employees rally outside the US Supreme Court March 25, 2014 in Washington, DC. (Getty Image).

Rienzi disagrees and told CNN that “A win for Hobby Lobby would not be a big change from the Court's understanding of religious liberty. The Court has already said that corporations can exercise religion, and that makes sense–virtually every church, synagogue, and mosque is a corporation. And the Court has also repeatedly protected religious exercise for people earning a living.”

A ruling by the Supreme Court is expected in late June.