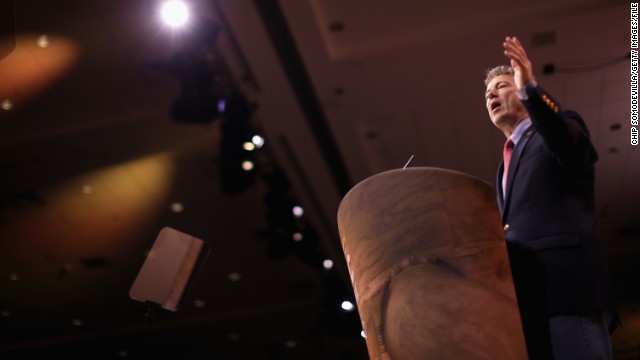 Your daily scoop of what State of the Union is watching today, March 19, 2014.

Your last day of winter edition of the Scoop!

1. MH370. Australian and U.S. teams are focusing their search for the missing plane on Australia's west coast, while the investigation into the jetliner's disappearance has turned to its unexpected change in direction. The altered route apparently was set before the pilots' last contact with air traffic control. Meantime, the many unanswered questions about Flight 370 is taking a toll on the families of the plane's 239 passengers and crew members. Some of the families protested what they say is the Malaysian government's lack of transparency in the investigation. The families of Air France Flight 447 crash victims have written a letter to the loved ones of the Malaysian plane's passengers urging them to demand a "neutral investigation to be carried out by experts of your choice in order to safeguard transparency."

2. Rand Paul on liberal turf. Sen. Rand Paul, R-Kentucky, is treading into unusual territory for Republicans. He is speaking Wednesday at the University of California at Berkeley, known as a hotbed of liberal thought and activism. Paul, who leads the crop of potential 2016 GOP presidential candidates in the latest CNN/ORC poll, is expected to focus on his fight against the National Security Agency's domestic surveillance program. "I am honestly worried - concerned about who is truly in charge of our government," says a prepared text of Paul's speech. "Most of you have read the dystopian nightmares and maybe, like me, you doubted it could ever happen in America." Paul has filed a federal lawsuit against the Obama administration claiming that the NSA's phone data collection program is unconstitutional and should be scrapped.

3. Dems divided over Keystone. As President Obama considers whether to approve construction of the Keystone XL pipeline, most Americans give the project a thumbs up, while the issue is a net loser among members of his party. According to a new Pew Research Center poll, 61% of Americans surveyed support building the pipeline, while 27% are opposed. Among Democrats, 49% favor the project, while 38% are opposed. Eight-four percent of Republicans favor the pipeline as do 61% of Independents. The White House hasn't said when a decision on Keystone will be issued, but a certainty is that approval of of the project will anger environmental groups and activists.

4. Independents' day in Arizona. It has been safely in the Republican presidential column for years, but could Arizona be heading to swing state status? According to new registration figures released this week, Independents have surpassed Republicans and Democrats as the largest voting bloc in the state. But Democrats might want to hold off on the celebrations. Arizona's Secretary of State Ken Bennett says even though Arizona has an open primary system, independents don't participate in primaries at a high rate.