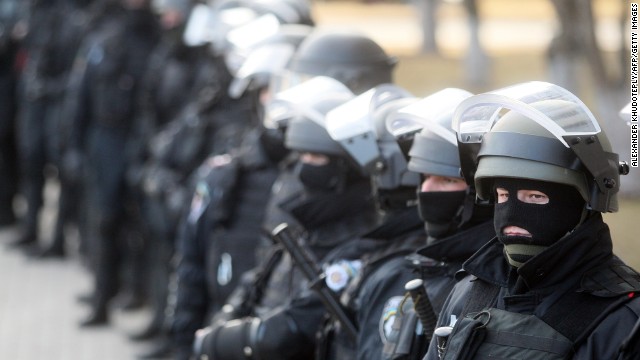 Hostilities intensified in Crimea Saturday as Ukrainian officials accused pro-Russian forces of armed aggression, and with an announcement by regional pro-Moscow authorities of a March 16 referendum to confirm the Crimea’s annexation to Russia.

President Barack Obama spoke on the phone Saturday with leaders from Britain, France, and Italy, and hosted a conference call with the presidents of Lithuania, Latvia, and Estonia. According to a White House statement, all leaders rejected the referendum as a “violation of Ukraine's constitution.” Secretary of State John Kerry meanwhile cautioned Russia that annexation of the Crimea would close the door to diplomacy.

The West is threatening anti-Russian sanctions, such as asset freezes and visa and travel bans. Appeals by the US and EU for Russia to use diplomacy to resolve the Crimea question have gone unheeded, with the Kremlin denouncing the new government as illegitimate and Putin steadfastly insisting that he has the right to use force to protect ethnic Russians in Crimea. The new Ukrainian leadership in Kiev, however, maintain that Crimea’s ethnic Russians had never been under threat, and that Putin is using that claim as pretext to annex the peninsula to Russia.

Putin still denies that the soldiers who have by now assumed control of many key military targets and offices are Russian troops–preferring to call them only defense forces sympathetic to Russia–but the men’s uniforms and the license plates on their armored vehicles suggest otherwise. Armed men equipped with semi-automatic weapons reportedly overran a military office in the regional capital of Simferopol on Saturday, where the government building no longer flies the Ukrainian flag, but the Russian tricolor. A CNN team outside the military office reported the premises as being calm, and that armed, masked men were painting Russian flags on the gate. The men refused to comment on what was happening inside the building.

Vladislav Seleznyov, a Crimean-based spokesman for the Ukrainian armed forces, said the men belonged to the Crimean “self defense” forces. However, near the town of Kerch, one of the troops who helped storm a Crimean border control point openly admittedto belonging to the Russian Black Sea Fleet. According to Ukraine’s State Border Guard Service, the officer on duty was beat up as he attempted to repel the troops, the armory was seized, and officers’ families expelled from their living quarters.

Also on Saturday, March 8, an unarmed plane belonging to the State Border Guard Service was fired upon midflight, in what the Guard Service described as “extremists” and “Russian armed aggressors” opened fire on the plane  with automatic weapons. The plane landed safely and was undamaged.

Near the port of Kerch, nearly 100 armed Russian military personnel, joined by Crimean “self defense” forces, blockaded a ferry crossing used to bring in Russian troops, military vehicles, and reinforcements, according to the State Border Guard Service.

Saturday marked the third consecutive day that armed men have refused to allow unarmed military observer mission from the Organization for Security and Co-operation in Europe (OSCE) to enter Crimea. The mission is now planning its next course of action in the southern Ukrainian city of Kherson.

Russian aggression has grown stronger toward Ukrainian troops who are trapped in the occupied military bases, and who have offered no resistance. On Thursday, a CNN report described a mother, with her young daughter in tow, being turned away from delivering food to her husband, who was trapped in an overrun navy building. As pro-Russia demonstrators swarmed her, calling her a “provocateur”, she insisted, "I'm here to give them food, because they're hungry...No one is feeding them. They can't go in or out." A Red Cross worker was turned away as well from attempting to deliver supplies.