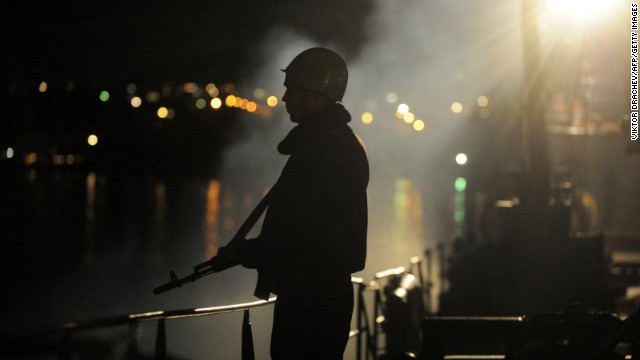 Your daily scoop of what State of the Union is watching today, March 6, 2014.

1. The Ukraine crisis. The U.S. has begun its sanctions squeeze on Russia over its movement of troops into Ukraine's Crimea region. President Obama signed an executive order that imposes financial penalties on individuals and entities seen as violating Ukraine's territorial integrity, though Russian President Vladimir Putin is not on the list. The order also allows visa bans to be imposed on certain individuals. Senior administration officials said the sanctions are intended to "send a strong message that we intend to impose costs on Russia for this intervention."

2. A new wrinkle. Although the U.S. and its allies appear to be united in its opposition to Moscow's action, Crimea's parliament has upped the ante by voting to break away from Ukraine and rejoin Russia. A public referendum on the issue is set for March 15. President Obama says such a move is illegal. "The proposed referendum on the future of Crimea would violate the Ukrainian constitution and violate international law. Any discussion about the future of Ukraine must include the legitimate government of Ukraine." Obama said.

3. Christie at CPAC. After being snubbed by the nation's largest conservative confab last year, New Jersey Gov. Chris Christie received a warm reception at this year's Conservative Political Action Conference underway in Washington. The potential 2016 Republican presidential candidate told the gathering that Republicans need to alter its message to voters if they are to beat Democrats in future national elections. "We've got to start talking about what we're for and not what we're against," Christie said. "Our ideas are better than their ideas and that's what we have to stand up for."

4. CBC takes on Rep. Issa. In the aftermath of a blowup between House Oversight and Government Reform Committee Chairman Darrell Issa and the panel's ranking Democrat, Rep. Elijah Cummings, the Congressional Black Caucus is calling for Issa to be stripped of his chairmanship. During a hearing Wednesday on alleged IRS targeting of conservative groups, Issa cut off the Cummings' microphone and adjourned the meeting as Cummings requested to speak. "Mr. Issa is a disgrace and should not be allowed to continue in a leadership role," said CBC chairwoman Rep. Marcia Fudge, D-Ohio, in a letter to House Speaker John Boehner. "We urge you to take prompt action to maintain the integrity of this body and remove Mr. Issa as chair of the Oversight and Government Reform Committee immediately." Issa has defended his actions, saying Cummings was "slandering me at the moment the mics did go off."