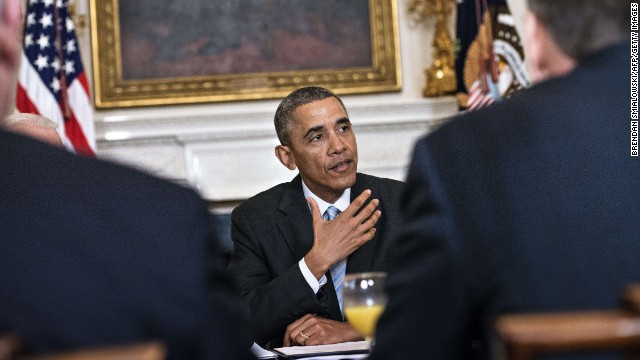 Your daily scoop of what State of the Union is watching today, February 21, 2014.

1. The governors. The nation's governors are in D.C for a three-day winter meeting that begins Saturday. With both the White House and Congress looking to the midterms, not much is expected out of Washington this year.  That means any action on the country's pressing domestic issues is more likely to happen in the states.  So what's going on out there on minimum wage, health care, same-sex marriage and the death penalty? And what do governors want from Washington? We'll talk with Gov. Mike Pence, R-Indiana, Gov. Dan Malloy, D-Connecticut, Gov. Rick Perry, R-Texas, and Gov. Jay Nixon, D-Missouri, on State of the Union Sunday.

2. So much for that "grand bargain." Now that President Obama's next budget won't include any proposal to cut Social Security payments in exchange for tax increases on the wealthy, don't look for that sweeping fiscal compromise he's been seeking since Republicans took control of the House. Democrats couldn't be happier as they always hated the idea of Social Security cuts. Obama's new budget will reject austerity and call for more investments in jobs, infrastructure and early childhood education. A White House official says Republicans have shown an unwillingness "to identify even one unfair tax loophole they would be willing to close, despite the President's of willingness to put tough things on the table. But House Speaker John Boehner's spokesman said Obama's shift shows "the President has no interest in doing anything, even modest, to address our looming debt crisis."

3. Ukraine's new deal. An agreement has been reached that could end days of deadly protests in the capital Kiev. The deal was crafted after negotiations involving the European Union leaders and Russia. It cuts presidential powers and calls for constitutional reforms. This week clashes between Ukrainian security officials and anti-government demonstrators left at dozens of people dead and hundreds more injured.  Ukraine's unrest began in November, when President Viktor Yanukovych decided to scrap a deal between his country and the E.U. and instead forge closer ties with Russia.

4. Chris Christie's still the (money) man. The G.W. bridge scandal may or may not threaten the New Jersey governor's future political plans, but so far it isn't affecting his ability to raise money for Republicans.  The Republican Governors Association has raised $18 million since Christie took over as chairman last November.  That is a new fundraising record for the first three months of a new RGA chairman.  Since the bridge scandal broke, some Republicans have questioned whether Christie should stay on as head of the RGA.  But the fundraising figures could erase those concerns. "Christie remains popular among Republicans, many of whom see the attacks on him as partisan efforts to destroy a popular GOPer," said Stuart Rothenberg, editor and publisher of the nonpartisan Rothenberg Political Report.

5. Ted Nugent is sorry, sort of. Rock musician and conservative activist Ted Nugent apologized for calling President Obama a "subhuman mongrel." "I do apologize – not necessarily to the President – but on behalf of much better men than myself," Nugent told conservative radio host and CNN political commentator Ben Ferguson. Nugent made his initial remarks about the President during a campaign appearance with Texas Republican gubernatorial candidate Greg Abbott.