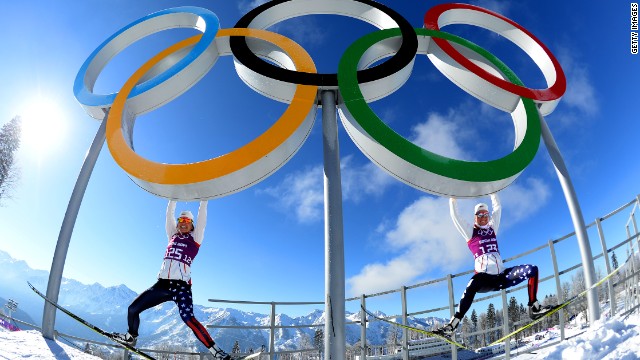 Get your daily scoop of what State of the Union is watching today, February 6, 2014.

1. Olympic terror plots. As the Winter Olympics begin in Sochi, Russia, the focus appears to be as much on potential terror threats as on the athletic competition.  With warnings that possible attacks could come by way of explosives hidden inside toothpaste tubes, the United States is responding by banning carry-on liquids on all of its flights to Russia.  Also, the chairwoman of the Senate Intelligence Committee is urging Americans who are going to Sochi to exercise extreme caution. "People going to the Olympics should be careful, I think they should watch their backs, I think they should stay out of crowds if they can," said Sen. Dianne Feinstein, D-California.  Former Homeland Security Secretary Janet Napolitano, who is heading the U.S. delegation to Russia, will discuss ongoing security concerns in Sochi this Sunday on State of the Union

2. USA! USA! USA! As for the competition, most Americans, unsurprisingly, are rooting for Team USA. According to a new CNN/ORC poll, 51% of Americans surveyed said it is important to them that the U.S. win more medals than any other country, while 49% said not so much. Men are rooting a bit more strongly for the American team than women by a margin of 57% to 50%.  The survey also found most Americans don't think highly of Russia. 55% have an unfavorable opinion of the country, compared to 41% who do. As for Vladimir Putin, 54% of Americans have an unfavorable opinion of the Russian president, while only 20% give him a favorable rating.

3. Boehner: House GOP doesn't trust Obama. House Speaker John Boehner says he's doubtful about immigration reform getting through Congress this year. "There's widespread doubt about whether this Administration can be trusted to enforce our laws and it's going to be difficult to move any immigration legislation until that changes," Boehner said. The Speaker added that he still wanted to tackle the issue, which has divided his Republican caucus. "This is an important issue for our country. It's been kicked around forever, and it needs to be dealt with."

4. Obama to Dems: I'm willing to stay away. President Obama is telling Democrats that keeping control of the Senate is his top priority, but he's willing to stay out of races where his presence would hurt candidates. "He certainly acknowledged how low his numbers are in certain states. And he noted they are bad in some states overall but that certain people would need him to help in certain parts of those states," said a source who attended a meeting Wednesday between the President and Senate Democrats. Although the Senate Democratic caucus currently holds a 55-45 majority, 21-Democratic-controlled seats are up for re-election this year, compared to only 15 Republican seats. The most vulnerable Democratic seats also happen to be in the red states of Arkansas, North Carolina, Louisiana and Alaska.

5. Ethics troubles for House's top Republican woman? The House Ethics Committee is investigating allegations that Rep. Cathy McMorris Rodgers, R-Washington, improperly mixed campaign money and official office funds to pay for her bid for a House GOP leadership spot after the 2012 election. A source close to the inquiry tells CNN a former staffer for McMorris Rodgers filed the complaint. McMorris Rodgers, who is the chairwoman of the House Republican Conference, gave the GOP response to President Obama's State of the Union address last month. "We are confident that every activity was compliant with all federal laws, House rules, and Standards of Conduct.  We are fully cooperating and look forward to seeing this matter dismissed,” said Nate Hodson, a spokesman for McMorris Rodgers.