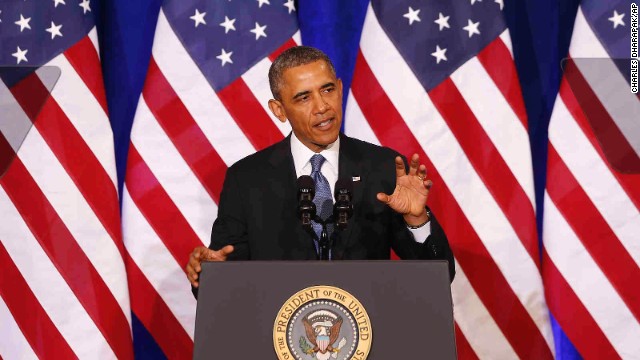 Get your daily scoop of what State of the Union is watching today, January 17, 2014.

1. Obama unveils NSA privacy reforms. In a much-anticipated speech, President Obama announced changes in the way the government will conduct its massive surveillance program. The changes include limits on the agency's phone data collection, an end to eavesdropping on the phone calls of allied countries leaders, and including privacy advocates in Foreign Intelligence Surveillance Court proceedings. The President also defended the country's intelligence community, saying "the United States is not spying on ordinary people who don't threaten our national security." Obama wants Congress to have a say in how some of his proposals will be implemented. We'll  talk with the House Intelligence Committee Chairman Mike Rogers, R-Michigan, and Senate Intelligence Committee member Angus King, I-Maine, Sunday on State of the Union.

2. Are planned reforms the Edward Snowden effect? Yes, according to some whistleblowers and civil libertarians. But do they go far enough? No, according to WikiLeaks Founder Julian Assange. "This president has been dragged, kicking and screaming to today's address. He is being very reluctant to make any concrete reforms. And unfortunately today we also see very few concrete reforms," Assange said in an interview with CNN. "What we see is kicking off the ball into the congressional grasps, into panels of lawyers that he will report – he will instruct to report back at some stage in the future."

3. Benghazi and the bridge. With controversies dogging Hillary Clinton and Chris Christie, will they dim the New Jersey governor's and former Secretary of State's prospects for a 2016 White House run?  Republicans are doubling down on their criticism of Clinton following a report by the Senate Intelligence Committee that concluded the 2012 Benghazi attack that killed four Americans was "likely preventable." But Democrats are hammering Christie for a massive bridge traffic jam that was apparently manufactured for political reasons. Recent polls show Clinton and Christie tied in a hypothetical  presidential matchup. Our panel weighs in on Clinton, Christie and scandal politics Sunday on State of the Union.

4. Jeb Bush, mom means what she said. Former First Lady Barbara Bush isn't keen on seeing another family member in the Oval Office. In a C-SPAN interview, Mrs. Bush iced the idea of her son Jeb running for president in 2016, or anytime for that matter. “There’s no question in my mind that Jeb is the best qualified person to run for president, but I hope he won’t," she said. “If we can’t find more than two or three families to run for high office (a reference to the Kennedys, Clintons and Bushes), that’s silly, because there are great governors and great eligible people to run." It's not the first time Barbara Bush rejected the notion of a Jeb Bush run. “We’ve had enough Bushes,” she told NBC back in April.

5. 50 is fabulous. First Lady Michelle Obama is eagerly embracing turning 50 years old today. She even tweeted out a photo of her with a new AARP card. "Excited to join Barack in the 50+ club today… check out my @AARP card!" she wrote. The First Lady's big celebration is tomorrow night at the White House, where there is expected to be lots of dancing, with a performance by the first couple's friend Beyonce.