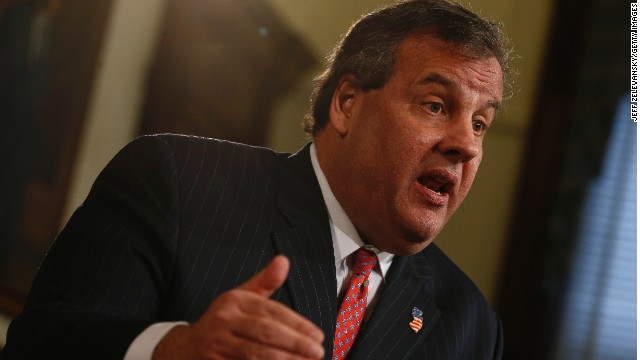 Get your daily scoop of what State of the Union is watching today, January 9, 2014.

1. Chris Christie's damage control. At a news conference lasting nearly two hours, the New Jersey governor said he was "sad, humiliated and embarrassed" about the conduct of some top members of his team, and insisted he had no previous knowledge of an apparent attempt to punish a local mayor who declined to endorse Christie for re-election. Christie said he fired his deputy chief of staff Bridget Anne Kelley, whom e-mails indicate gave the order to an official at the Port Authority of New York and New Jersey to cause traffic jams around the town of Fort Lee. The governor also apologized to Fort Lee and state residents. "Ultimately I am responsible for what happens under my watch – the good and the bad – and when mistakes are made then I have to own up to them and take the action that I believe is necessary in order to remediate them," said Christie.

2. But will the bridge sink his 2016 plans? Top Republican officials from early primary states are predicting the scandal won't hurt Christie if he decides to launch a White House bid. "I don't think this will make any difference whatsoever if Gov. Christie runs," Stephen Duprey, Republican National Committeeman from New Hampshire, told CNN. "People in New Hampshire could care less about whether some bureaucrat working on his staff did something stupid like this." South Carolina's national Republican committeeman echoed that sentiment. "It doesn't matter. He did what a leader should do. You take accountability for what happened," said Glen McCall. Speaking of governors with possible 2016 ambitions, we’ll have an exclusive conversation with Maryland Governor Martin O’Malley Sunday on State of the Union.

3. Closing in on a deal. Democratic and Republican negotiators in the Senate are nearing an agreement that would extend jobless benefits through November. A source close to the talks tells CNN the $18 billion extension would be paid for by extending mandatory budget cuts for a year, and reducing the number of people who are getting both unemployment insurance and Social Security disability benefits at the same time. Democrats hope the measure will satisfy Republican demands to offset the cost of extending unemployment benefits. It's not clear if the legislation will get through the Republican-led House if it does clear the Democratically-controlled Senate. "If we pass something over here, I can't imagine how difficult it would be for them just to turn a blind eye to these people who are desperate for a little help," said Senate Majority Leader Harry Reid.

4. The mess in Iraq. As the country backslides into violence fueled largely by al-Qaeda-linked fighters, some Republicans say President Obama is at fault for ignoring Iraq after the departure of U.S. troops. "Starting with the President delegating his responsibilities to the Vice President, the administration has chosen to spend much of its time and energy trying to explain why having terrorists holding a key terrain in the Middle East is not the President's problem," said House Speaker John Boehner. He called for the U.S. to send some "equipment and services" to help the Iraqi government launch a counter-terrorism effort, but stopped short of calling for the return of U.S. troops. "I don't think that's called for at this point and time," Boehner said.

5. What's in a name? If you are Washington's football team, plenty that's bad according to the federal government. The U.S. Patent and Trademark Office rejected an application to trademark the name "Redskins Hog Rind," ruling that the term "Redskins" is "a derogatory slang term that refers to, and is considered offensive by, American Indians." But the agency's decision won't impact the marketing of the D.C. area’s football team, whose name owner Dan Snyder has been under growing pressure in recent years to change. Snyder insists that will "N-E-V-E-R" happen. By the way, Washington, which finished the season with a dismal 3-13 record, hired a new head coach Thursday.  He is Jay Gruden, who was the offensive coordinator for the Cincinnati Bengals. Lots of luck to him. Something tells us he'll need it.