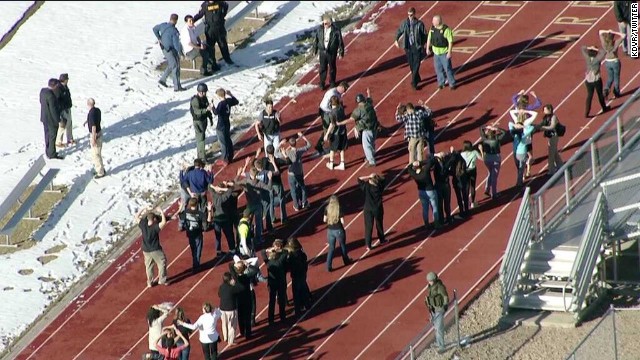 Get your daily scoop of what State of the Union is watching today, December 13, 2013

1. Mystery about missing American deepens.  An American man missing in Iran for nearly seven years was reportedly working there as a CIA operative and not conducting private business as officials previously claimed.  The Associated Press and the Washington Post both report that Robert Levinson had been working undercover in a rogue CIA operation. The AP says it decided to move forward with publishing the story after holding off several times.  White House Press Secretary Jay Carney declined to comment on Levinson's activities but did say "Bob Levinson was not a U.S. government employee when he went missing in Iran."

2. Colorado school shooting. A shooting at a Colorado high school ended with the suspected gunman dead and two other students ended.  The incident occurred at Arapahoe High School in Centennial, Colorado, about 10 miles from Littleton, Colorado, where the Columbine high school massacre occurred in 1999.  Sheriff Grayson Robinson said the dead gunman was a male student at Arapahoe High, and apparently died of a self-inflicted gunshot wound.  "We have not been able to locate a second suspect, but that's part of our ongoing investigation," the sheriff said.

3. Gun control, going nowhere?  The Colorado shooting was yet another reminder of gun violence still gripping the country as it marks the first anniversary of elementary school massacre in Newtown, Connecticut.  Senate Democratic Leader Harry Reid expressed frustration that efforts to tighten gun laws have been stalled. "At a time when more than 30,000 Americans are killed each year it is shameful that the United States Senate can’t pass gun safety legislation that would protect our most vulnerable citizens – our kids, our children, our babies," Reid said.

4. Huckabee mulls 2016.  Count former Arkansas governor-turned-talk show host Mike Huckabee in as a potential 2016 White House contender.  Huckabee, who as a 2008 Republican presidential candidate, Huckabee has been meeting with several groups from the early voting states of Iowa and South Carolina.  He has always enjoyed strong support from social conservatives, a big voting bloc in both states.  "I'm keeping the door open," Huckabee told the New York Times. "I think right now, the focus needs to be on 2014.  But I'm mindful of the fact that there's real opportunity for me.