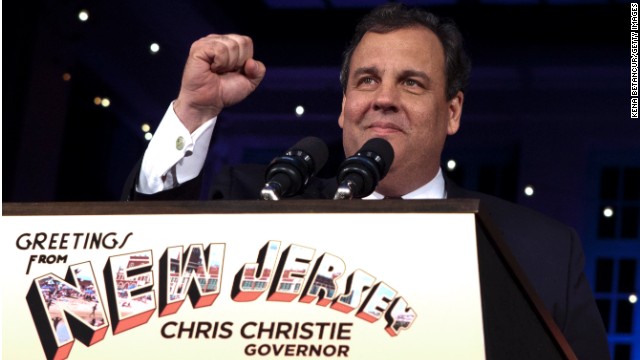 Get your daily scoop of what State of the Union is watching today, November 6, 2013.

With the 2013 elections in the rearview mirror it’s time to move on to the 2014 midterms and better yet, the 2016 presidential race. Who’s in, who’s out, and what do last night’s results say for Republicans and Democrats?

1. Christie for President in 2016? It wasn’t much of a surprise: Christie won re-election and he did it big. The New Jersey Governor beat Democratic challenger Barbara Buono by a 60%-38% margin. But then again, that was so yesterday. Today everyone seems to be talking about Christie’s political future and possible 2016 presidential run. CNN Political Commentator Alex Castellanos described Christie’s acceptance address as a 2016 “announcement speech.”

CNN Exit polls showed Christie winning 57% of the female vote, 51% of the Latino vote, and all age demographics except for the 18-29 group.

If the presidential election were held today, Hillary Clinton would win among New Jersey voters by a 48% -44% margin, according to the exit polls.

2. In Virginia, Democrats win: If you read the polls it didn't look like it would be a close one, but Former Democratic National Committee chairman Terry McAuliffe beat Virginia Attorney General Ken Cuccinelli by a narrow 48% – 46% margin with 98% of the votes counted.

In his victory speech, McAuliffe said, "This election was never a choice between Democrats and Republicans, it was a choice about whether Virginia would continue the mainstream, bipartisan tradition that has served us so well over the last decade."

CNN Political Commenator John Avlon writes in an opinion piece published on CNN.com that Cuccinelli lost due to his “extreme “views. He warns other Republicans that if they continue to move to the right, they too will have problems in 2014 and 2016.

Meanwhile back in Washington Obamacare continues to take center stage.

3. HHS Secretary back in the hotseat: Health and Human Services Secretary Kathleen Sebelius faced another round of grilling on Capitol Hill today over the troubled rollout of HealthCare.gov. Testifying before the Senate Finance Committee, Sebelius rejected calls by both Republicans and Democrats to delay the implementation of Obamacare’s individual mandate that requires people to get health care or pay a fine, saying, “delaying the Affordable Care Act wouldn’t delay people’s cancer, diabetes or Parkinson’s… for millions of Americans delay is not an option.” Last week Sebelius testified before a House committee and apologized for the rocky website launch.

Check back tomorrow for your SOTU Scoop of what we're watching.