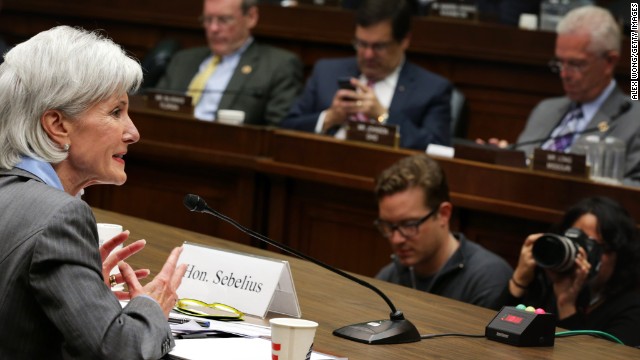 Get your daily scoop of what State of the Union is watching today, October 30, 2013.

1. Sebelius gets grilled. HHS Secretary Kathleen Sebelius faced more than three hours of questioning at a house hearing on the troubled Healthcare.gov website. She promised that the site's troubles would be corrected by the end of November, but offered an apology. "Let me say directly to these Americans: You deserve better. I apologize. I'm accountable to you for fixing these problems," Sebelius told members of the House Energy and Commerce Committee.

2. Obama's broken promise? In the selling of his top legislative accomplishment, President Obama insisted that "if you like your insurance plan, you will keep it. No one will be able to take that away from you." But news that thousands of Americans are being notified that their health insurance policies are being cancelled at the end of the year, appears to dispute that President's pledge. His administration claims the canceled policies will be replaced by better plans. Still, the controversy opens a fresh line of attack against health care law and raises questions about whether Obama deliberately misled the public about the Affordable Care Act.

3. And the world's most powerful person is... Vladimir Putin according to Forbes Magazine. Russia's president beat out President Obama for the top spot in Forbes' 2013 ranking of the world's most powerful people. Obama dropped to the number two spot, with General Secretary, Communist Party of China Xi Jinping, Pope Francis and German Chancellor Angela Merkel rounding out the top five. Seventy-two people made this year’s list. Forbes considers how many people they have power over; the financial resources they control; if they have influence in more than one sphere; and how actively they wield their power to change the world.

4. A close one in Virginia? Less than a week until Election Day, new poll shows a tightening Virginia governor's race. A Quinnipiac University survey released Wednesday finds Democrat Terry McAuliffe leading Republican State Attorney General Ken Cuccinelli 45 to 41 percent among likely voters, with Libertarian Party candidate Robert Sarvis receiving nine percent support. The poll found that four percent of likely voters remain undecided in the three-way race, and seven percent of those who name a candidate say there's a "good chance" they will change their mind in the next six days.

5. Pelosi: No taxes, no budget deal. House Democratic leader Nancy Pelosi said her caucus could not support any budget agreement that doesn't include new tax revenues. A conference committee of Republicans and Democrats met for the first time in four years Wednesday to begin fleshing out a blueprint for federal spending. "Our position is that we are going to the table in order to reduce the deficit, grow the economy, create jobs, end the sequester, revenue needs to be on the table," said Pelosi.