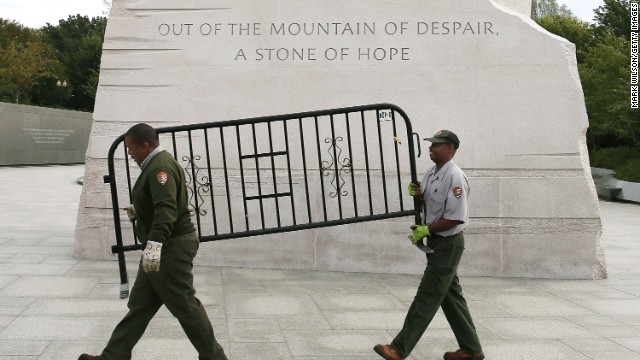 Get your daily scoop of what State of the Union is watching today, October 17, 2013

1) Back in business. Hundreds of thousands of federal workers are back on the job after Congress passed and President Obama signed legislation to end the partial government shutdown and raise  the country's debt ceiling. "There are no winners here," the President said Thursday. "The last few weeks have inflicted completely unnecessary damage on our economy."

2) Now what? With the shutdown over, President Obama outlined what he'd like to get done in the near future. "Passing a budget, immigration reform, farm bill," he said. "Those are three specific things that would make a huge difference in our economy right now.  And we could get them done by the end of the year if our focus is on what's good for the American people."

3) Not so fast Mr. President. One House Republican who backs immigration reform says he doesn't think the House will try to reconcile with the Senate on the issue because of the recent fiscal standoff. "If the President is going to show the same kind of good faith effort that he's shown in the last couple of weeks, I think it would be crazy for the House Republican leadership to enter into negotiations with him on immigration," Rep. Raul Labrador (R) Idaho said.

4) McConnell's "impossible dream." Senate Republican leader Mitch McConnell said it was regretful that House Republicans spent  "several weeks on an impossible dream that many of us have," of killing the Affordable Care Act. "It's clear that Democrats are not gonna blink," on Obamacare, McConnell said in an interview with a Lexington, Kentucky radio station. McConnell, who is facing a Tea Party primary challenger and a strong Democratic opponent, promised to keep up the fight against the health care law.

5) Throw the bums out. A new poll finds a record number of voters want most members of Congress defeated in the 2014 midterm elections. According to the Pew Research Center survey, 75% of registered voters don't want current lawmakers to be re-elected and nearly 4 in 10 voters want to see their own Congress member defeated.