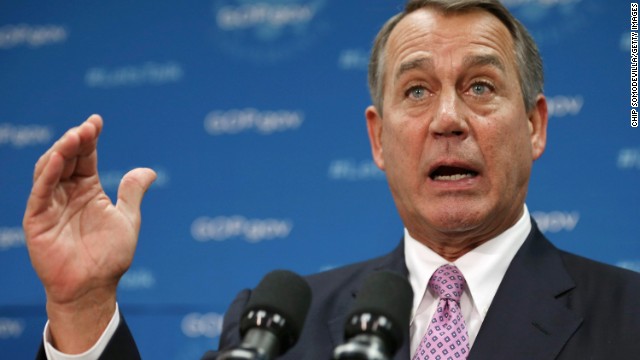 1) The shutdown: Day Four.  “This isn’t some damn game.” the words of House Speaker John Boehner after the Wall Street Journal quoted an unnamed senior administration official as saying "we are winning" the government shutdown fight. "The American people don't want their government shut down and neither do I," Boehner said. “All we are asking for is to sit down and to have a discussion and to bring fairness – re-open the government and bring fairness to the American people under Obamacare."

2) Making his case over hoagies.  During an impromptu trip to a sandwich shop that is offering 10 percent discounts to furloughed federal workers, President Obama said "nobody's winning" as long as the shutdown continues.  "This furlough or this shutdown could be over today," the president said.  "We know there are the votes for it in the House of Representatives."

3) Piecemeal approach.  House Republicans are introducing bills that would reopen parts of the government. "Today we're going to vote to open FEMA and the National Weather Service as we witness a growing storm in the Gulf.  And we're also going to vote to provide nutrition services for women and children in poverty," said House Majority Leader Eric Cantor." The White House and Senate Democrats aren't biting. They say it's all or nothing.

4) Fed up with Washington.  A new CBS News poll finds 72 percent of Americans disapprove of the government shutdown.  44 percent blame Republicans for the shutdown mess, while 35 percent fault President Obama and the Democrats.

5) Duking it out in Jersey.   Democrat Cory Booker and Republican Steve Lonegan met in their first debate in the New Jersey Senate race.  In a heated exchange right off the bat, Lonegan ripped Booker's record as Newark's mayor.  "We simply cannot allow Cory Booker to bring his failed record as mayor of Newark to the U.S. Senate," Lonegan said. "We need a leader not a tweeter.” Booker pushed back, accusing Lonegan of trying to "distract from his extremist views."