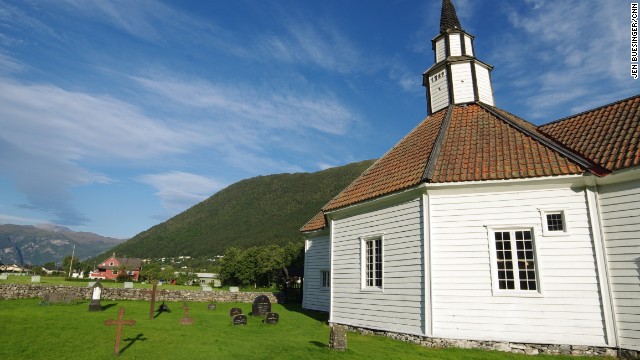 The author loves to find cemeteries wherever she is, even halfway around the word in Alesund, Norway.
September 26th, 2013
11:36 AM ET

It's a macabre fascination, I know, but I have a secret to share… I love cemeteries. People are mostly horrified when they hear this.  “Creepy” and “Weird” are two common words.  I prefer “fascinating”.

It’s a walk through history where I can daydream about the historical events that coincided with average people’s lives. I imagine someone seeing electricity for the first time, or indoor plumbing, or cars.  If they served in war, what must that have been like?  What sort of horrors did these people witnesses that have been lost to time?

I like to read headstones and imagine what kind of life this person lived.  Life was hard and cruel not that long ago.  Women routinely died in childbirth.  A child often didn’t live to see her second birthday.  But life moved forward because it had to.  Things were simpler, yet much harder in many ways.  It was about survival and family, not about money and possessions.  There wasn’t any place to escape if you had a bad day.   You had to face your fears back then, and now we just bury our faces in our smartphones when things get rough.

Cemeteries are quiet.  They’re often away from roads or on a hill, allowing me to escape the noise.  There are so few places in the world to escape the constant barrage of information facing us every day.  I feel an immense sense of peacefulness and respect while walking amongst the monuments to individual lives.

I giggle at ostentatious headstones and mausoleums. Why would anyone want to put their insecurities and need for attention on display long after they’ve left this earth?!  I’m reminded of Roland Burris, appointed by former Illinois Governor Rod Blagojevich to fill Barack Obama’s Senate seat in 2009.  Still very much alive and breathing, Mr. Burris had a mausoleum built with the words  “Trail Blazer” across the top, a list of accomplishments, and space left for future good deeds.  I don’t doubt Mr. Burris’ contributions to society, but come on man. Conversely, I’m humbled by the simple epitaphs on smaller graver markers “Beloved Daughter, Wife, Mother, Friend."

Burris' mausoleum lists his firsts, including being the first African-American attorney general in Illinois.

Whenever family or friends come to town, I insist they visit two places.  Arlington National Cemetery and Congressional Cemetery.  Arlington brings me to tears nearly every time I go.  I am amazed at the number of people who gave their lives to fight for this country.  Everyone wants to see the Kennedy graves and the Tomb of the Unknowns, but I like walking through random areas, reflecting on the lives lost and the families left behind.  I’m especially moved when I walk through Section 60, the area reserved for service men and women who died in Iraq and Afghanistan.

Members of the Army's 3rd Infantry Regiment - also known as the "Old Guard" - plant flags at tombstones in Arlington National Cemetery in Washington on Thursday, May 23, ahead of Memorial Day.

Walking through Congressional Cemetery is like walking through an American History book. You’ll find regular folks, war heroes, Native American Chiefs, politicians, and artists. Wikipedia sums it up nicely (natch) “In all, there are one Vice-President, one Supreme Court Justice, six Cabinet Members, 19 Senators and 71 Representatives – including a former Speaker of the House, buried there; as well as veterans of every American war, and the first Director of the Federal Bureau of Investigation, J. Edgar Hoover.” Hoover’s longtime companion Clyde Tolson is buried next to him. Also buried at Congressional, Leonard Matlovich, famous for being the first service member to come out of the closet and fight for equal rights in the military. His tombstone doesn’t even bear his name. It says "A Gay Vietnam Veteran. When I was in the military, they gave me a medal for killing two men and a discharge for loving one"

My beloved Grandma Daisy took me to the Gorden family cemetery in rural central Illinois one summer afternoon many years ago.  A dirt road jutted off a country road somewhere between the tiny towns of Stonington, Assumption, Blue Mound, and Moweaqua. I couldn’t find this place again if my life depended on it. (Sorry, bad pun).  Up on a hill was a cemetery filled with my ancestors, dating back well into the 19th century. I never knew these people existed, but here they are, buried until the end of time.  And that’s why I love cemeteries.  It’s a connection to our past, our present, and because we’ll all end up there one day, our future.