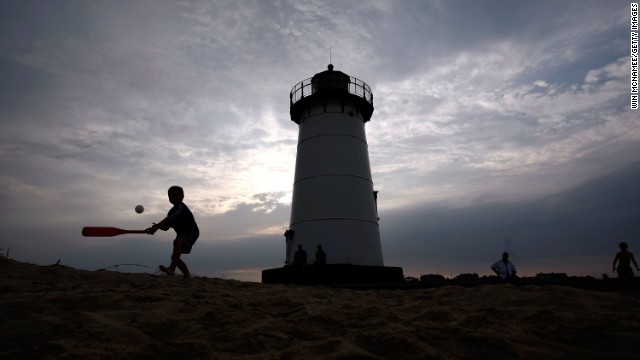 Vacationing alongside the First family

It’s August, which means many Washingtonians are venturing outside the beltway for that last summer vacation- including the Obamas.

Next Saturday, the first family heads to Martha’s Vineyard, one of several islands off the southern coast of Cape Cod, Massachusetts. This will be the Obama family’s fourth summer on the Vineyard, having visited the island previously in August of 2009, 2010 & 2011. The Vineyard’s low-key, easygoing vibe makes it a popular vacation choice for celebrities and politicians – but it’s also a place where plenty of regular New Englanders go to unwind & relax. The author of this blog post falls under the latter category, and as she packs her bags for a 23rd summer on the island, she’s compiled an informal list of tips based on past Presidential trips to make the most of your Vineyard vacation:

1) Bring your bike- MV’s bike paths are a great way to check out the roughly 25-mile long island. In years past, President Obama has been spotted biking around the island with his daughters, Sasha and Malia.

2) Show off your dog (but watch out for skunks)- During his presidency, Bill Clinton was seen walking Buddy the first dog down Circuit Avenue, the popular main street lined with shops and restaurants in the town of Oak Bluffs. According to Vineyard legend, 2 errant pet skunks brought onto the island years ago escaped and resulted in what’s now become an unfortunate skunk problem on island- so be sure to keep your pets indoors at night!

3) Eat (a lot of) seafood- From lobster to scallops and freshly caught swordfish, nobody does seafood like New England. Whether you prefer to pick up your catch from family-owned Larsen’s Fish Market or sample the oyster of the week at Nancy’s Restaurant (an Obama family favorite), the Vineyard is the perfect place to try all kinds of seafood from A to Z.

4) Hit the beach- The best part about being on island? Being surrounded by ocean & beautiful beaches! Whether you like to kayak, swim, parasail or relax on the shore with a good book, you can’t go wrong on your Vineyard vacation when you’re near the beach!