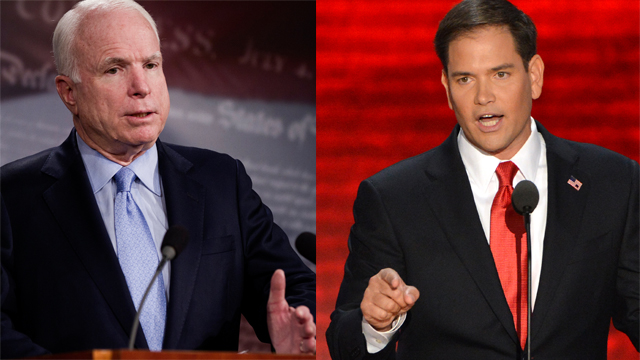 An Exclusive interview with Senator John McCain (R-AZ) on the continuing standoff with North Korea as its leader Kim Jong-Un threatens to fire a ballistic missile.

Then, Republican Senator Pat Toomey (R-PA) and Democrat Senator Joe Manchin (D-WV) draw the ire of the NRA after forging a compromise that expands background checks to gun shows and internet sales. Will their bill help give House members political cover to do the same?

And, hurry up and wait. Protestors take to the National Mall, demanding that members of Congress act fast on an immigration bill, but Florida Senator Marco Rubio (R-FL) is urging his colleagues to take their time. We’ll find out what’s in his bill, and its chances for success.

This week Candy answers five questions from Facebook and one from Twitter including a possible political comeback for Anthony Weiner, the influence of the NRA, and ninjas... yes ninjas. Thanks for all the questions and check back next week for your chance to Ask Candy.

Facebook question from Fritz Alcenat
"What do you think about "Weiner" comeback running for New York Mayor. It's New York people would trust him again or we wouldn't trust him at all. As I'am a democrat, I would like to know your opinion, because he was a good person."
Voters have been known to forgive some politicians involved in a variety of sex scandals and I don't think Weiner would even be considering running for New York Mayor if he didn't have an inkling that enough NY voters have/will forgive his sexting and lying about it (perhaps some preliminary polling or some such?).  Having said that, Weiner's past is going to come up if he runs.  New York is a tough political and media environment. Do he and his wife want to put up with the snickers, the jokes, the questions?

END_OF_DOCUMENT_TOKEN_TO_BE_REPLACED

When Jay-Z and Beyonce became the subject of a White House press conference, the politics of spring in Washington must be on hand.

As Jay-Z laid down a rap about his family’s controversial trip to Cuba, the cherry blossom trees bloomed back home, here, in D.C. Here are the political issues that bloomed this week on Capitol Hill:

John Kerry to South Korea: In the continuing saga of “Will He or Won’t He?” North Korean leader Kim Jung-Un is leading the headlines over his threat to fire a nuclear missile. Secretary of State John Kerry is in South Korea and said Friday it would be a “huge mistake” if North Korea launches a nuclear-armed missile. The world awaits North Korea’s next moves, but Kerry and South Korea’s allies believe much of North Korea’s tough talk cannot be backed by an actual successful attack. This followed a meltdown on Capitol Hill after Rep. David Lamborn (R-CO) revealed classified information that is believed to have been mistakenly labeled as unclassified information, saying the U.S. Defense Intelligence Agency has “moderate confidence” that North Korea has nuclear-armed missiles.
END_OF_DOCUMENT_TOKEN_TO_BE_REPLACED