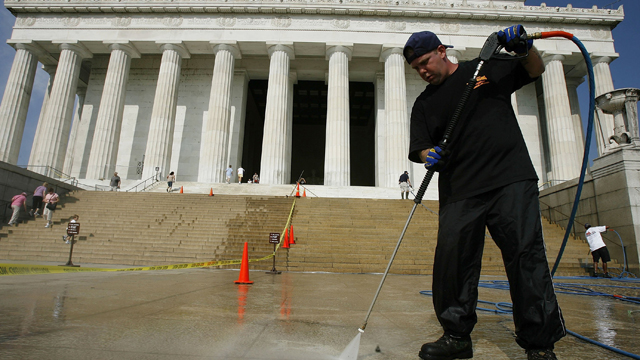 Wednesday was the first day of spring – but it isn’t getting much warmer here in D.C. While Washingtonians feel the sting of near-freezing temperatures outside, members inside Congress face an equally cold front on gun control legislation. At the same time, politicians on the Hill, Supreme Court Justices, and legislators across the 50 states are working to clean up recent controversial issues – including same-sex marriage, veterans and immigration.

Waiting for the starting gun

On your marks, get set….no go.

This week saw little progress on gun control legislation in Congress, despite push from members and the White House to take action. Senate Majority Leader Harry Reid said earlier this week that Senator Dianne Feinstein’s proposed ban on semi-automatic firearms modeled after military assault weapons will not pass. On the other side, House Speaker John Boehner told CNN’s Jake Tapper this week that he supports real background checks – but neither chamber has yet been able to reach a deal.

The Supreme Court is considering appeals over two major cases on same-sex marriage – the Defense of Marriage Act (DOMA) on the national level, and Proposition 8 in California. We’ll talk with California Attorney General Kamala Harris – who has called the law unconstitutional – about the high court’s consideration of the case, and what this could mean for her state. With President Obama formally backing support for same-sex marriage in California earlier this month, and recent polls showing a shift in the American public in favor of gay couples’ right to wed, we’re wondering what the outcome of these high-profile cases could mean for the fate of same-sex marriage nationally. Austin Nimocks, Senior Legal Counsel with Alliance Defending Freedom, will also join us to discuss what the Supreme Court could decide, and what the interpretations of this could be moving forward.

Backlog for vets getting back to work

The past few weeks have seen Congress questioning the Veterans Affairs Department for ever-increasing piles of benefits claims, leaving returning soldiers to wait years for compensation.  According to a recent analysis by the Center for Investigative Reporting, the average wait time for veterans filing their first claim – including those returning from Iraq and Afghanistan – is up to 327 days, and could be up to two years in major cities. This is just one of many challenges facing veterans – the VA released a report last week estimating 22 veterans committed suicide in America each day in 2010, a significant increase from just a few years ago. We’ll talk Sunday about can be done to help veterans transition to successful civilian lives when they return from war.

And finally, we’ll have National Journal’s Ron Brownstein on as part of our political panel to discuss what hot-button legislation Congress is considering – including immigration. This week saw a shift in the Republican party on immigration law – on Tuesday, newly crowned GOP favorite Senator Rand Paul became the most recent party member to take a more open-arms approach, saying if the nation’s 11 million illegal immigrants come to the country for work, “then we will find a place for you.” We’ll talk with our panelists about what this shift means for getting immigration laws through Congress.