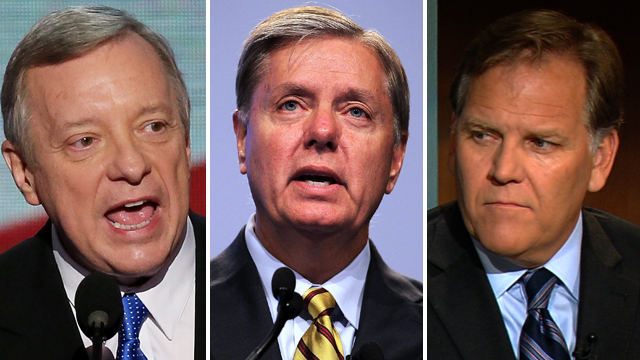 Mitt Romney says Obama hasn’t delivered on his promise to change Washington, and Romney tries to control his own message with a late-week tax record dump. Who has the upper hand on campaign strategy as we head into the final weeks of the election? We’ll ask Senators Dick Durbin (D-IL) and Lindsey Graham (R-SC).

Then, House Intelligence Chairman Mike Rogers (R) on the emerging questions around possible security lapses in the deadly assault on the U.S. Consulate in Libya.

And, as the candidates court the small sliver of voters who haven’t made up their minds in battleground states, we’ll take a closer at the electorate that may hold the keys to the White House. Candy talks to pollsters Whit Ayres and Anna Greenberg. Plus, Susan Page of USA Today and CNN Senior Political Analyst Ron Brownstein.

RT @jaketapper: Coming up live at the G7 in Krün, Germany on @CNNSotuotu⁩ https://t.co/JRt0mE7uA5
CNNsotu

8:50 am ET June 26, 2022 RETWEET
RT @jaketapper: Greetings from the municipality of Krün, where the G7 leaders are meeting, and where we will be hosting@CNNSotuu featuring…
CNNsotu

7:54 am ET June 26, 2022 RETWEET
RT @Christi_Paul: Good #SundayMorning friends! - There's a surge in calls for unions - @LaborDiversity talks abt what impact that may have…
CNNsotu