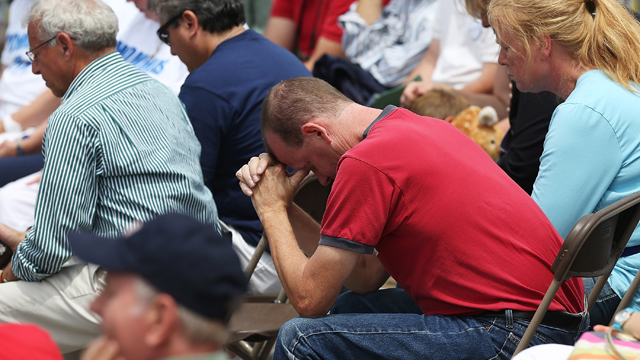 Supporters at a rally for Republican presidential candidate Mitt Romney pause for a moment of silent prayer after 12 people are killed and 51 injured in a shooting spree in Aurora, Colorado.
July 20th, 2012
04:50 PM ET

In one of the deadliest mass shootings in U.S. history, a masked gunman opens fire on theatergoers at a midnight movie killing 12 and injuring 59 in Aurora, Colorado. Police have the alleged suspect, James Holmes, in custody and a law enforcement source tells CNN that all the weapons were purchased legally in the last six months at sporting good stores in the Denver area. We’ll have the latest on the investigation and an update from Colorado Gov. John Hickenlooper.

Then, as the movie theater massacre puts the presidential campaign on hold we’ll talk to Senator John McCain (R-AZ) about the shooting, the unraveling of the Assad regime in Syria, and Mitt Romney’s upcoming overseas trip.

Then, the high stakes battle for control of the senate with Virginia Senate Candidates Republican George Allen and Democrat Tim Kaine. We’ll have highlights of the debate and interviews with each of the candidates.