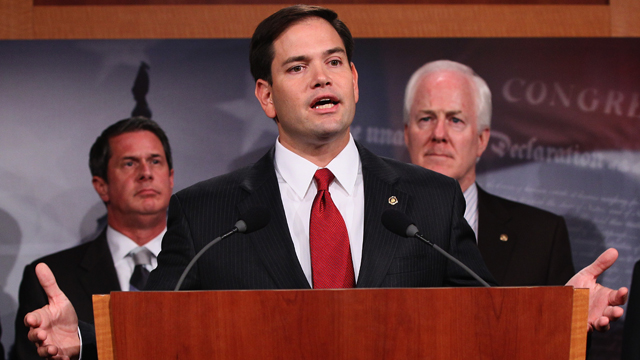 The GOP establishment appears to be coalescing around Mitt Romney. Last night he got backing from Florida Sen. Marco Rubio and today from former President George H.W. Bush. Despite speculation about a possible VP role, Rubio told CNN, "Yeah, I'm not going to be the vice president."

This afternoon, the House approved a Republican backed budget split along party lines. It includes an overhaul of the tax code and big changes to popular entitlements such as Medicare. The $3.5 trillion measure has no chance of passing the Democratic controlled senate but creates a contrast between the parties on spending and tax issues ahead of November's election.

We're following developments in the Trayvon Martin shooting investigation. Today there are new questions with the release of surveillance video showing George Zimmerman, the man accused of shooting Martin, in custody at Sanford police headquarters following the shooting. The video appears to show George Zimmerman without any major injuries. This contradicts the account given by Zimmerman's father who says Martin beat his son so badly that he was forced to shoot him self defense.