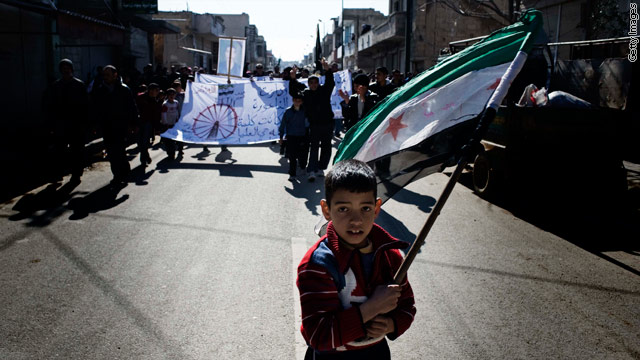 With escalating violence in Syria read the Republican Presidential candidates’ perspectives on the Middle East:

“Likewise, with the Arab Spring now turning into an Arab winter, [President Obama] has been asleep at the switch. He has been ineffective in being able to promote democracy and freedom and the free exercise of personal rights in parts of the world that are obviously critical to the stability of the world. So, this president has really failed, I think an almost every dimension of foreign policy, this president has weakened America's relative strength.” – Mitt Romney on FOX’s Hannity, February 9, 2012

“That problem has been going on for many, many years if not centuries. Its a tragedy, that happens in Africa all the time, but I’m not representing those countries, as a congressman and as a president I represent the United States, and I don’t think its a wise thing to get involved in the civil war that’s going on in Syria.” – Ron Paul on CNN’s John King USA, February 7, 2012

"I think there are a lot of things we could do covertly in terms of supplying weapons, supplying - helping people in the region supply advisers. I think we should make clear to the world that Assad is going to go. And I think you can put together a coalition to get rid of him. I don't think you need to use American troops, but you do need to communicate that those who are opposed to Assad will get the kind of support they need in order to defeat him." – Newt Gingrich on CBS Face the Nation, February 5, 2012

“Well, I wouldn't say with U.S. military action. But certainly from the very beginning, I would have called for Assad to step down. This is something that President Obama did with respect to one of our closest allies in the Middle East, Egypt. You had Hosni Mubarak, who was a friend, clearly a dictator but a friend, someone who was in a stable peace relationship with Israel and the United States. And as soon as the riots got anywhere intense, he immediately called for Mubarak's removal. He's done the opposite with Syria, which has been a thorn in the United States side, obviously a thorn in the side of the Israelis.” – Rick Santorum on FOX News Sunday, August 21, 2011

Compiled by our State of the Union interns Lily Colley and Gerron Jordan.